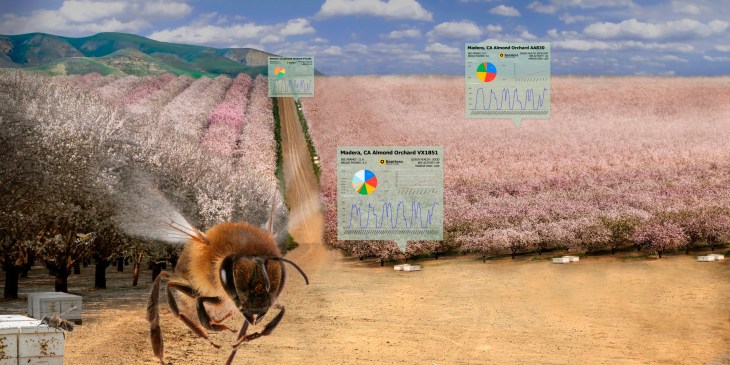 Vast monoculture farms outstripped the ability of bee populations to pollinate them naturally long ago, but the techniques that have arisen to fill that gap are neither precise nor modern. Israeli startup https://www.beehero.io/]BeeHero aims to change that by treating hives both as living things and IoT devices, tracking health and pollination progress practically in real time. It just raised a https://www.webwire.com/ViewPressRel.asp?aId=259562]$4 million seed round that should help expand its operations into U.S. agriculture.
Honeybees are used around the world to pollinate crops, and there has been growing demand for beekeepers who can provide lots of hives on short notice and move them wherever they need to be. But the process has been hamstrung by the threat of colony collapse, an increasingly common end to hives, often as the result of mite infestation.
Hives must be deployed and checked manually and regularly, entailing a great deal of labor by the beekeepers – it’s not something just anyone can do. They can only cover so much land over a given period, meaning a hive may go weeks between inspections – during which time it could have succumbed to colony collapse, perhaps dooming the acres it was intended to pollinate to a poor yield. It’s costly, time-consuming, and decidedly last-century.
So what’s the solution? As in so many other industries, it’s the so-called Internet of Things. But the way CEO and founder Omer Davidi explains it, it makes a lot of sense.
“This is a math game, a probabilistic game,” he said. “We’ve modeled the problem, and the main factors that affect it are, one, how do you get more efficient bees into the field, and two, what is the most efficient way to deploy them?”
https://techcrunch.com/wp-content/uploads/2020/05/beehero_hardware.jpg]

Normally this would be determined ahead of time and monitored with the aforementioned manual checks. But off-the-shelf sensors can provide a window into the behavior and condition of a hive, monitoring both health and efficiency. You might say it puts the API in apiculture.
“We collect temperature, humidity, sound, there’s an accelerometer. For pollination, we use pollen traps and computer vision to check the amount of pollen brought to the colony,” he said. “We combine this with microclimate stuff and other info, and the behaviors and patterns we see inside the hives correlate with other things. The stress level of the queen, for instance. We’ve tested this on thousands of hives; it’s almost like the bees are telling us, ‘we have a queen problem.’ “
All this information goes straight to an online dashboard where trends can be assessed, dangerous conditions identified early and plans made for things like replacing or shifting less or more efficient hives.
The company claims that its readings are within a few percentage points of ground truth measurements made by beekeepers, but of course it can be done instantly and from home, saving everyone a lot of time, hassle and cost.
The results of better hive deployment and monitoring can be quite remarkable, though Davidi was quick to add that his company is building on a growing foundation of work in this increasingly important domain.
“We didn’t invent this process, it’s been researched for years by people much smarter than us. But we’ve seen increases in yield of 30-35% in soybeans, 70-100% in apples and cashews in South America,” he said. It may boggle the mind that such immense improvements can come from just better bee management, but the case studies they’ve run have borne it out. Even “self-pollinating” (i.e. by the wind or other measures) crops that don’t need pollinators show serious improvements.
The platform is more than a growth aid and labor saver. Colony collapse is killing honeybees at enormous rates, but if it can be detected early, it can be mitigated and the hive potentially saved. That’s hard to do when time from infection to collapse is a matter of days and you’re inspecting biweekly. https://crunchbase.com/organization/beehero]BeeHero’s metrics can give early warning of mite infestations, giving beekeepers a head start on keeping their hives alive.
https://techcrunch.com/wp-content/uploads/2020/05/beehero-heroes.jpg]

“We’ve seen cases where you can lower mortality by 20-25%,” said Davidi. “It’s good for the farmer to improve pollination, and it’s good for the beekeeper to lose less hives.”
That’s part of the company’s aim to provide value up and down the chain, not just a tool for beekeepers to check the temperatures of their hives. “Helping the bees is good, but it doesn’t solve the whole problem. You want to help whole operations,” Davidi said. The aim is “to provide insights rather than raw data: whether the queen is in danger, if the quality of the pollination is different.”
Other startups have similar ideas, but Davidi noted that they’re generally working on a smaller scale, some focused on hobbyists who want to monitor honey production, or small businesses looking to monitor a few dozen hives versus his company’s nearly 20,000. BeeHero aims for scale both with robust but off-the-shelf hardware to keep costs low, and by focusing on an increasingly tech-savvy agriculture sector here in the States.

https://techcrunch.com/2019/02/01/lets-save-the-bees-with-machine-learning/]Let’s save the bees with machine learning

“The reason we’re focused on the U.S. is the adoption of precision agriculture is very high in this market, and I must say it’s a huge market,” Davidi said. “Eighty percent of the world’s almonds are grown in California, so you have a small area where you can have a big impact.”
The $4 million seed round’s investors include Rabo Food and Agri Innovation Fund, UpWest, iAngels, Plug and Play, and J-Ventures.
BeeHero is still very much also working on R&D, exploring other crops, improved metrics and partnerships with universities to use the hive data in academic studies. Expect to hear more as the market grows and the need for smart bee management starts sounding a little less weird and a lot more like a necessity for modern agriculture.