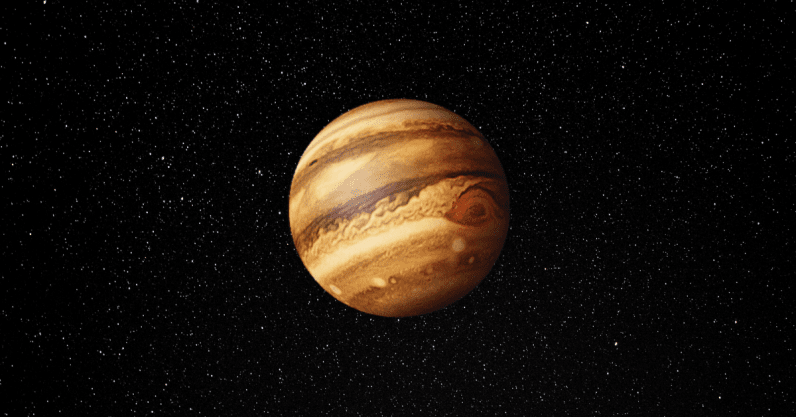 Storms on Jupiter are among the most powerful squalls seen anywhere in the Solar System. Now, a new study brings together the Gemini Observatory in Hawaii, the Hubble Space Telescope, and the Juno spacecraft in an effort to understand these behemoth tempests.

Thunderheads on Jupiter can reach 65 kilometers (40 miles) tall, five times as large as their cousins on Earth. Lightning from these storms erupt with three times as much power as the most massive superbolts seen on our own world. Like familiar lightning here at home, lightning on Jupiter produces both visible light and radio waves. 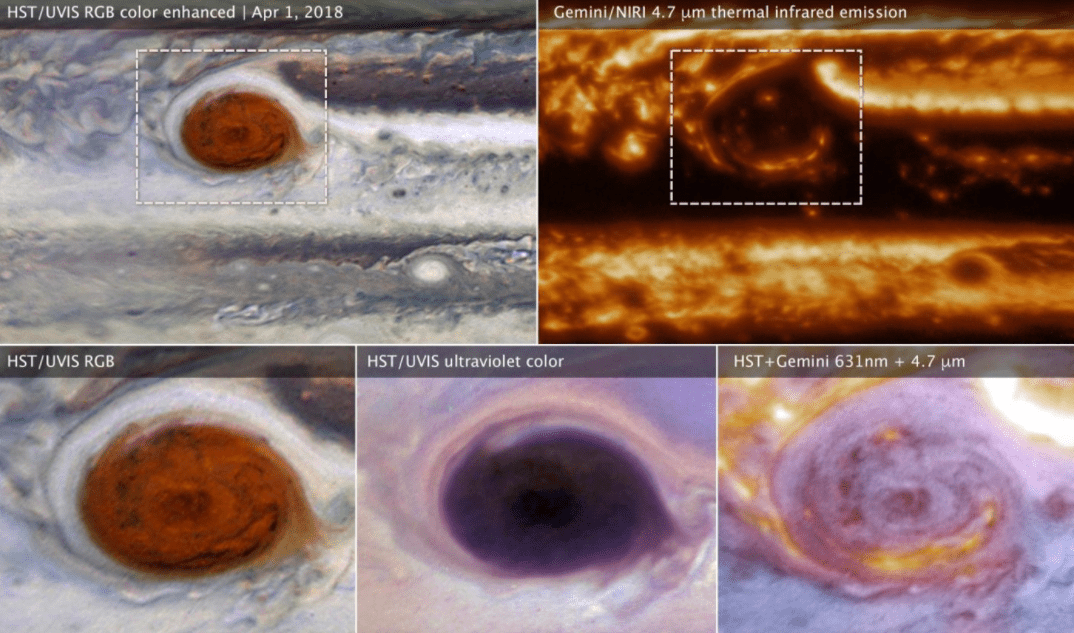 The Great Red Spot of Jupiter, seen by the Hubble Space Telescope (HST) and the Gemini Observatory in Hawaii. Image credit: NASA, ESA, and M.H. Wong (UC Berkeley) and team.

Once every 53 days, the Juno spacecraft orbiting Jupiter dips down low above the planet. At these altitudes, the orbiting observatory witnesses sferics and whistlers, types of radio signals produced by lightning on Jupiter. The name sferic is short for atmospheric, and whistlers are named after the distinct sound they make on radio receivers. Even on the day side of Jupiter, or deep within its mighty cloud tops, these signals allow astronomers to detect lightning, even when it cannot be seen.

As Juno swoops down low, the Gemini Observatory on Earth and theHubble Space Telescopein orbit each train their sights on the region. While Juno probes deep into the atmosphere, examining the events in microwaves and high-energy radio waves, Gemini looks at the region in infrared light, andHubbleviews the same area in visible light.

“Juno’s microwave radiometer probes deep into the planet’s atmosphere by detecting high-frequency radio waves that can penetrate through the thick cloud layers. The data from Hubble and Gemini can tell us how thick the clouds are and how deep we are seeing into the clouds,” Amy Simonof NASA’s Goddard Space Flight Center explained.

Together, observations from the three observatories suggest that outbreaks of lightning on Jupiter result from interactions between three types of clouds. The first of these a deep clouds composed of water. The second are mammoth thunderhead columns that form from upswelling of air. The third formation are clear regions outside the columns, where drier air falls back down into the depths of the atmosphere. 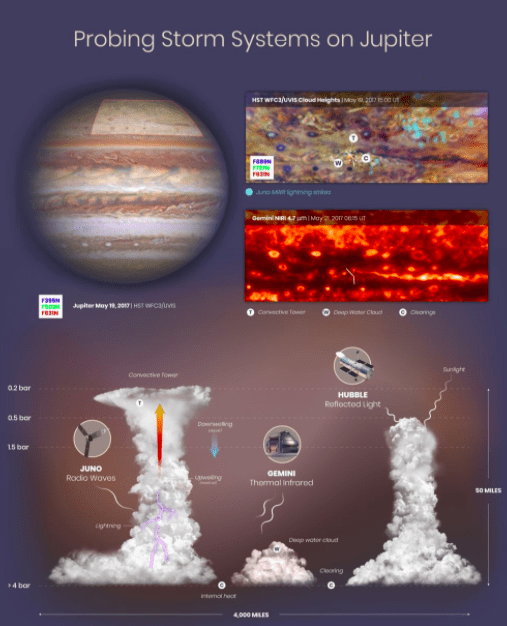 “The largest concentration of lightning seen by Juno came from a swirling storm called a “filamentary cyclone.” Imaging from Gemini and Hubble shows details in the cyclone, revealing it to be a twisted collection of tall convective clouds with deep gaps offering glimpses to the water clouds far below,”NOIRLabreports.

The convective towers, featuring thick clouds, are apparent in images from Hubble. The Gemini telescope spied into the clear regions, glimpsing deep water clouds in their depths. As Juno orbits the planet,Hubbleand Gemini are both studying the world more often, hoping to unravel the secrets of the largest planet in our Solar System. 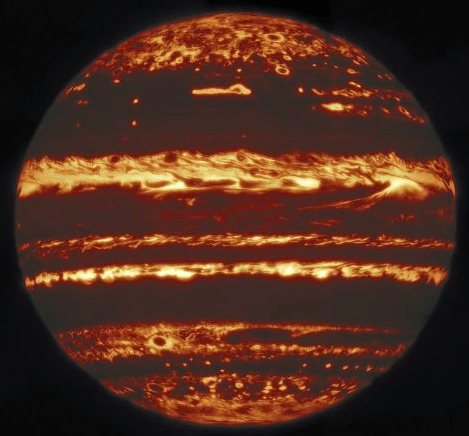 The Gemini team used a technique they call Lucky Imaging to produce their contribution to the three-mission study. This technique is similar to the way a portrait photographer might take hundreds of shots of a model, attempting to get a few great poses. The Gemini North telescope in Hawaii was used to take a large number of photographs of Jupiter. The most detailed of these – recorded when atmospheric conditions were best – were selected. This resulted in images nearly as clear and detailed as those taken by space-based observatories, researchers state.

Lightning may be common in folded filamentary regions, where whirlpools of gas release energy from one region of theplanetto another.

Studying deep water clouds like these could help astronomers learn more about how Jupiter – as well as our entiresolar system– formed. Astronomers hope to learn how much water is found in the atmosphere of Jupiter, and how heat is transferred around thegas giant.

Whom Jupiter would destroy he first drives mad. – Sophocles

The magnificent colors of Jupiter – including the Great Red Spot – are a hallmark of what makes the planet so beautiful. But, why they are there remains a mystery, despite study by several generations of spacecraft.

“The era of high-resolution Jupiter imaging at visible wavelengths began in space, with the Pioneer and Voyager spacecraft flybys. These missions gave the first looks at discrete features like convective plumes and the first accurate measurements of the zonal winds,” researchers report in

Previous missions to Jupiter showed dark spots within the Great Red Spot, which appear, change shape, and disappear over time. One of the questions astronomers sought to answer was whether these markings were dark features within (or on top of) the storm, or if these regions were “holes” in the mighty storm, allowing us to see into the vortex.

Together, the Hubble Space Telescope, Gemini North Observatory, and the Juno spacecraft unraveled one of the mysteries of Jupiter. Image credit: NASA/NOIRLab/NSF

By combining data from the trio of observatories, it is now possible to answer that question. The dark markings are, in fact, holes in the massive storm system.

Regions which look dark in visible light are quite bright in infrared images, showing they extend into the storm. Where clouds are scarce, heat from the interior ofJupiteris free to escape to space, in the form of infrared light. This radiation – seen in data from Gemini- is blocked by clouds.

“It’s kind of like a jack-o-lantern. You see bright infrared light coming from cloud-free areas, but where there are clouds, it’s really dark in the infrared,” Wong said.

The NASA video blow shows a simulated flight into the Great Red Spot of Jupiter, based on data from the Juno spacecraft.

As Juno orbits Jupiter, astronomers will learn more about how the atmosphere and weather behaves on that giant planet. In some ways, the combination of observatories acts in much the same way as utilizing both satellite and surface data in predicting terrestrial weather.

“Because we now routinely have these high-resolution views from a couple of different observatories and wavelengths, we are learning so much more about Jupiter’s weather. This is our equivalent of a weather satellite. We can finally start looking at weather cycles,”Simon says.

Using multiple instruments, each with its own capabilities, allows astronomers to see targets using multiple instruments at the same time. This multi-messenger astronomy shows events in several wavelengths of light at the same time. Looking at objects over several frequencies of the electromagnetic spectrum can also remove barriers, like clouds of gas and dust, that can obscure some observations.

This article was originally published on The Cosmic Companionby James Maynard, founder and publisher of The Cosmic Companion. He is a New England native turned desert rat in Tucson, where he lives with his lovely wife, Nicole, and Max the Cat. You can read this original piece here.