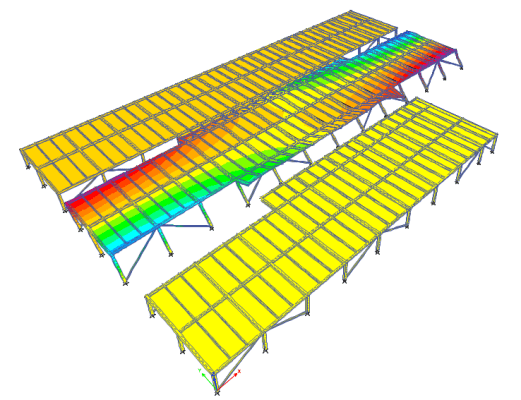 Housing has been constructed for millennia, and while clearly our modern abodes are ever so slightly better than the elk tents we used to live in, the construction techniques behind housing today haven’t progressed all that much. What has progressed are prices – it’s https://sf.curbed.com/2020/2/11/21133328/sf-construction-prices-increase-rlb-housing-development]more expensive than ever to build a modern unit, and that’s just for housing – head over to commercial real estate and the numbers don’t look much better.
For Martin Diz and his team, that’s a problem. Diz is not exactly a lifelong builder – in fact, he was building proverbial rockets as an aerospace engineering PhD researcher several years ago. As he was talking to his roommate back then, who was studying structural engineering, he realized that some of the techniques that his roommate’s field was trying to pioneer had already been discovered by the aerospace folks decades ago.
His roommate was trying to simulate an earthquake to model how the tremors would affect objects like a table inside a building. As Diz recalled, he said “Hey dude, did you know that in aerospace engineering, we did the same thing for the space station 50 years ago? . I learned this in grad school, you know, in our basic course because it’s a very old technique.”
Diz is legitimately a nice chap, and totally not the kind of aerospace engineer who goes around talking about how aerospace solved everything a century ago (okay, maybe just a tad of that). But the interaction and followup conversation got him thinking about what aerospace as a field had solved, and whether some of those techniques could be used in other domains.
Diz and his roommate kept talking over the years, and eventually, the two formed http://www.tangobuilder.com]Tango Builder. Tango’s main premise is to bring more sophisticated engineering techniques to construction, improving performance and quality while lowering costs. It’s part of the current YC batch, and previously raised a small seed round, which included participation from Tracy Young, co-founder and CEO of PlanGrid.
The two, plus one employee, have already worked on a handful of projects, with some early promising results. Tango helped to design a hospital for COVID-19 patients in Ecuador that saw total savings of $1 million by lowering structural costs by a third. They consulted on the creation of a justice center in Mexico, and were able to reduce the required steel in the project by 40%. And they used their platform to optimize wall thickness in a masonry home to bring total cost down by 15%. All numbers are reported by the company and have not been independently verified.

A look at Tango’s masonry home project. Photo from Tango Builder.
There is a heavy focus on structural integrity (as there should be in construction), but Tango particularly shines around seismic modeling. While earthquakes are perhaps most pronounced in places like California and Mexico, both of which suffered major tremors this past week, earthquakes are a lingering threat throughout the world, and buildings need to be designed to handle them even if they are rare.
Diz and his team want to give designers better tools to model what happens in different scenarios while understanding the trade-offs of various building materials and designs. “You’re building with steel stock, but it’s much more expensive now, so it’s up to the user or the owner to decide which of the paths he wants to take,” he said. Safety is always important, but how much steel do you place in a building that might see an earthquake once a century? That’s what Tango wants to help answer.
Beyond improving structural modeling, Tango’s big ambition is to find additional efficiencies in the construction process by helping everyone involved with construction work together through a better workflow. “Each person has benefits from the platform, the architect will get the approvals . faster, the engineer can focus on the creative side of things, the contractor” can bid earlier knowing what design is coming, Diz explained. Saving time in all these processes ultimately translates directly to a project’s bottom line.
It’s very early days of course, with just Diz, his co-founder Juan Aleman, and one employee “working extremely hard.” The hope though is that melding some aerospace engineering techniques with a much more robust and technical platform will help push construction to better quality while saving costs as well. After all, aerospace did all this a century ago.